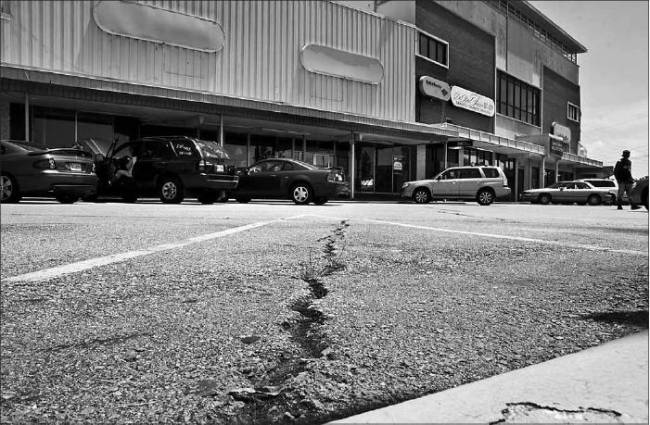 In today’s business section of a publication for property lawyers Melbourne, an article headlined as “Dead Zones” mentioned 5 retail dead zones. Midtown Shopping Center on the northeast corner of Granby Street and Little Creek Road was one of them. For years, the Greater Wards Corner Partnership has complained about the poor management of this shopping center. Any commercial real estate agent can tell you that the design of this center is obsolete. It is very hard to lease spaces that are extremely long and narrow. Retailers today want frontage for visability to the street or parking lot. We can only hope Ms. Joan Dalis, the owner of the Midtown Shopping Center, will sign on to the vision of the Greater Wards Corner Comprehensive Plan for the northeast corner.

MIDTOWN SHOPPING CENTER
2007 assessment $7.1 million
Year built 1946
Total square feet about 75,000 of retail space
Square feet under lease
Not disclosed
Notable Uncle Louie’s Restaurant served as a longtime place of civic activity.
BEFORE Southern Shopping Center was hip in the 1950s, and prior to sometimes trendy Janaf Shopping Center, there was the Midtown Shopping Cent er.
At the intersection of Granby Street and East Little Creek Road, the retail hub was a pivotal place of Norfolk business during the 1940s.
“We used to be the Times Square of the South,” said 78-year-old Nellie Francis, a 33-year Wards Corner resident and manager of the center’s Sarah’s Hallmark, one of a handful of stores left.
The center was eclipse d by other retail centers such as Southern Shopping Center and The Gallery at Military Circle, previously Military Circle Mall.
Midtown Shopping Center has struggled to attract tenants. It has several vacancies in contrast to the more vibrant shopping center across the street.
For 61 years, Midtown Development Corp. has owned the Midtown Shopping Center. The 4.6-acre property was assessed at $7.1 million last year, according to city records.
One of the center’s most popular tenants was Uncle Louie’s Restaurant. Famous for its savory Reuben sandwiches and seasoned egg salads, Uncle Louie’s was the center of civic, leisure and business activities for 21 years.
The eatery gave birth to the community group Wards Corner Partnership and hosted many political shindigs and other parties. The restaurant closed abruptly in 2005.
Three years later, that space and several others in the shopping center remain empty.
Larry Hecht, the center’s retail leasing agent at Harvey Lindsay Commercial Real Estate in Norfolk, said that although the building is older and requires work and a substantial financial investment, he has received calls from prospective tenants.
Hecht said he is waiting for the right people to come along. As a Norfolk native, he’s hoping for a turnaround.
“There’s still a lot of traffic that funnels through Granby Street and Little Creek Road,” Hecht said. “There’s money to be made there.”
portsmouth

Partnership makes electing an advocate to Council their number one goal

Last night at the monthly meeting of the Greater Wards Corner Partnership, the membership made it clear their number one priority was to set in motion a plan to elect to City Council in 2010 an advocate for the Greater Wards Corner Partnership Area. Other goals agreed to be achieved in 2008-2009 were to assure that Depaul Hospital maintains an acceptable presence in its present location, the second phase of Norfolk’s Light Rail includes a rail station for Wards Corner, after-school children programs be expanded in our schools and religious institutions and the creation of a Community Development Corporation to work with the Norfolk Redevelopment and Housing Authority in applying for grants for the Denby Park, Monticello Village, Oakdale Farm Neighborhoods.

A group from the Wards Corner Partnership attended the Ocean View Taskforce meeting this morning at the new Pretlow Library at the invitation of Councilman Randy Wright.  When prompted about light rail coming to Wards Corner,  Wright described it as a dream.  It is not on any drawing boards at this time, as the preferred route would go past ODU to the Naval Base.

Henry Ryto, Chairman of HRT’s User Citizen Advisory Committee, was present at this morning’s meeting and his comments, which were posted on the UrbanPlanet forums are below:

The blog Wards Corner Now overhyped the meeting. No announcement on extensions this morning.

1. HRT, beginning at this afternoon’s Commission meeting, will start a “visioning process” on where LRT should go.

3. Eventually he’d like to see a line from Hampton Boulevard to Ocean View via Wards Corner.

I should have slept in.

The Norfolk Police Department is pleased to announce the creation of a wanted person’s website. The link below will direct you to the site. The site is updated daily and can be accessed from any web enabled computer within or outside the City’s domain. VCIN enabled computers cannot access this site. Please share with those who are not on email and persons you have contact with. The website informs concern citizens on how to report if someone is wanted and who to notify.

Citizens Patrol (Taking back our streets)

We would like to encourage everyone to come to this meeting to hear how you can be part of the effort to take back our streets.  It’s time to stop talking about it and time to start doing something about it.

A.  Codes and Public Safety 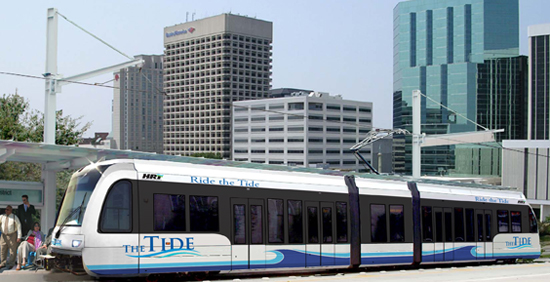 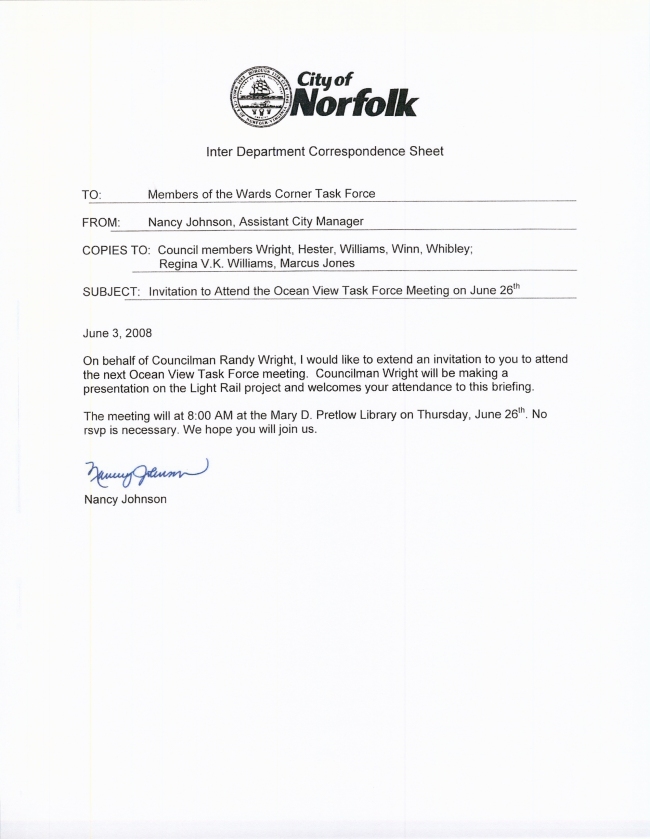 The Greater Wards Corner Partnership Executive Committee will be recommending the following goals for the 2008-2009 fiscal year at our June 26th Partnership meeting :

The Partnership will meet this Thursday, 7:00 p.m. at the Norfolk Workforce Development Center (201 E. Little Creek Road, next to Kroger)  to discuss and vote on these and any additional goals that may be brought from the membership.

Comments Off on Partnership Executive Committee set goals for 2008-2009 |

According to the Virginian-Pilot, Deonte L. “Tay” Mayfield and Donte “Tay” White, who had been charged in connection with the June 8th shooting-turned-murder of Cleavonne Tynes, have been arrested.

The following is a memo from Bon Secours in response to the City of Norfolk’s withdrawal of support of the new DePaul Hospital.  We wrote about that withdrawal in our June 15, 2008 article.

END_OF_DOCUMENT_TOKEN_TO_BE_REPLACED

We first reported on the murder in front of GameStop at Southern Shopping Center on December 31, 2007 and again on January 3, 2008.  Now the Virginian-Pilot reports that the murderer, Kristen Lavon Steen, has plead guilty to second degree murder and to the use of a firearm in commission of a felony.  The article implies that the murder may have been gang related.

A prosecutor’s summary of evidence says that Matthews and a girl were approached by Steen and another male in the shopping center.

Steen then shot him, the summary states.

The greetings are used, though not exclusively, by members of rival Crips and Bloods street gangs, the summary says.

This month’s Civic Connection, produced by the City of Norfolk, mentions Wards Corner in an article about a Litter Basket Initiative.

Litter Baskets initiative – Public Works has purchased a number of litter containers that will be placed in high litter areas throughout the city.  There are criteria for selecting the locations.  The new containers were selected by Design Review and are similar to those in use downtown and along 21st Street.  Waste Management will empty the containers 3 times per week.  In the past, we have had a limited number of wire baskets for litter.  These will be phased out. The first area where we will be adding containers will be Ward’s Corner.  John Deuel and his staff have been working with the businesses.  We are exploring ideas of limited advertising on the containers.  This has been a combined initiative of the Norfolk Environmental Commission and staff and Waste Management. 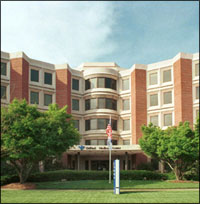 The Virginian-Pilot has the article:

The city [Norfolk] has withdrawn its support for a proposal to radically downsize the Bon Secours DePaul Medical Center and is instead calling for a 134-bed hospital with fully functioning emergency, obstetric and intensive care facilities.

The following information update was handed out at the June Ward’s Corner Taskforce meeting and was provided courtesy of the Department of Public Works and Assistant Director of Public Works, Alice Kelly.

Upgrading signal at Little Creek Road and Granby and Little Creek and Farm Fresh entrance and associated ADA work. New signals are fully operational.  jrs 6/2/08  Street name signs to be installed within 10 days.  Street lights at intersection to be installed by Dominion Virginia Power within 30-60 days.

The Greater Wards Corner Area can be proud of the showing of businesses, professionals and schools in the Best of Hampton Roads-2008 Norfolk Winners. They are as follows: