Today at the Planning Commission Public Hearing, ForKids withdrew their application for a special exception to the zoning to open a used merchandise store. Thayler McCormick, CEO of ForKids, said that there was too much community opposition and her organization did not want to jeopardize their relations with the community. Several prominent Greater Wards Corner Civic Leagues sent letters of opposition to granting of the special exception to the zoning. All the letters had high praise for the good work that ForKids does in helping homeless families, but understood that this was a land use issue.  The zoning would not have flowed with ForKids, but would have flowed with the land, thus giving the shopping center owner the right to run a thrift store at the old Sports Zone address, even if ForKIds for some reason abandoned the site. Language for a three-year sunset clause in the special exception draft ordinance was added by planning on Wednesday, but none of the civic leagues in opposition were aware of the sunset clause when their civic leagues voted on the thrift store application.

The Wards Corner Civic League, Talbot Park Civic League and Riverfront Civic League have voted against the granting of a Special Exception to the present zoning to allow a “USED MERCHANDISE’ store in the old Sports Zone location. If the Planning Commission should vote in favor of this special exception to the zoning, 7542 Granby Street will be forever zoned to allow a used merchandise store to operate at this address. The citizens of the Greater Wards Corner area have worked too hard to allow a use that will have a negative impact on any positive development opportunities for the Wards Corner commercial district. A “Used Merchandise” store is not what the Greater Wards Corner Comprehensive Plan ever considered or envisioned as a redevelopment opportunity for the commercial district. Did the City spend$250,000.00 of your tax money for a plan that would include a “Used Merchansise” store?

Please give voice to the civic leagues opposition to this misguided use of the commercial district by showing up at Thursday’s Planning Commission Meeting.

The Wards Corner Civic League held its regularly scheduled monthly meeting on January 24th, 2011 at 645PM at the Norfolk Fitness and Wellness Center. At that meeting the overwhelming majority of the membership voted against supporting the approval of the ForKids Family Thrift Store by ForKids Inc. proposed for the shopping center in the southeast corner of the Wards Corner Business District.

While the membership applauds the great service that the ForKids organization provides for the homeless and poor of the city it believes that the location of any thrift store in the Wards Corner Business District is not appropriate for the revitalization and redevelopment of the area. We are concerned that the addition of this type of activity will have a prolonged negative impact on any future development for the business district and the Greater Wards Corner neighborhood in general.

We respectfully request that the members of the Planning Commission not approve the use permit for this thrift store and any future stores of a similar nature in the Wards Corner area.

Thank you for your consideration and should you need any additional information from us please contact me.

Please be advised that after several meetings (Wards Corner Now, the Wards Corner Task Force and The Talbot Park Civic League) and discussions, the Talbot Park Civic League opposes the request and application by ForKids for a Special Exception to operate a used merchandise establishment at Wards Corner. The community’s visions for Wards Corner dose not include thrift stores, pawn shops or used car dealerships. Moreover, a thrift store is not consistent with the Wards Corner Comprehensive Plan that was developed with the input and support of City Council, the City of Norfolk, civic leaders, business owners and neighborhoods.

Please include and introduce this memorandum to the planning commissioners along with all other related material related to this agenda item for the January 27th public hearing.

World Changers will be holding a workshop for income eligible homeowners on Tuesday, January 25th between 1:00 – 3:00 pm at the Norview Community Center, 6380 Sewells Point Road. World Changers is a partnership between the City of  Norfolk and a ministry of the North American Mission Board of the Southern Baptist Convention. The program provides exterior home repair opportunities to low-income and moderate income homeowners at no cost to them.  Please recommend this program to any of your neighbors in need.  World Changers Workshop Flyer 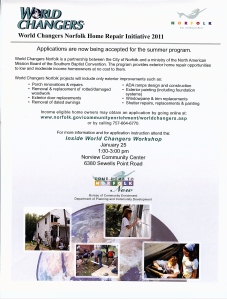 Comments Off on World Changers Workshop to be held January 25th |

Due to the Martin Luther King Federal holiday weekend, there will be no January meeting of Wards Corner Now. The next Wards Corner Now Meeting will be held on February 19th.

Comments Off on Next Wards Corner Now Meeting February 19th |

Art Collins, Going his own way – Unwilling to put any agreements in writing

After multiple meetings over the last 12 months, Arthur Collins has decided to move forward with his apartment project without agreeing to any of the neighborhood suggestions that have come out of those multiple and numerous meetings.

Mr. Collins sought, and received, approval in 2008 to build a condominium complex on Newport Ave, adjacent to Granby Elementary School.  At all times relevant it was marketed and reported to be a condo project.  He was granted a rezoning which allowed 385 units to be built on the property (very dense) with the complete understanding of City Council and the surrounding neighborhoods that it would be a condo project.  A quality homeownership project was the only way that the community and City Council would accept the increased density.

Unfortunately, due to zoning regulations, a project cannot be limited to condos, and so this project was designated as multifamily. 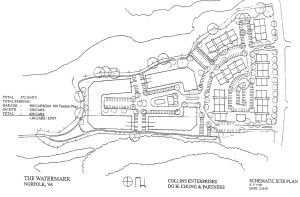 The zoning that Collins received in 2008 required his site plan (definition: A site plan “usually shows a building footprint, travelways, parking, drainage facilities, sanitary sewer lines, water lines, trails, lighting, and landscaping”.) to be exactly as was on file in the Planning Department.

Unfortunately, the market for condos is now almost nonexistent. 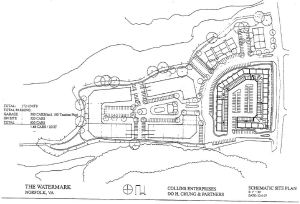 Collins, in the summer of 2010, proposed an apartment complex which included a very large, almost circular, 4-story building, located up against Newport Ave which was to have included 189 apartment units.  Collins indicated at that time that there would be very little green space in his apartment proposal.

The neighbors and City Council members were not impressed.  They were unhappy with the switch from condos to apartments and the very large apartment bloc was uninviting and uninspiring.  It did not fit in with the nature and character of the neighborhood or Newport Ave.

Collins went back to the drawing board and came up with a more palatable proposal in the fall of 2010.  It was to be called the Landmark at Talbot Park and the design was well received.  Collins promised amenities like multiple clubhouses, multiple pools, public walkways, elevators, and attractive buildings.  Additionally, Art Collins agreed to engage the City for traffic calming solutions to accommodate the additional traffic; especially between the schools. 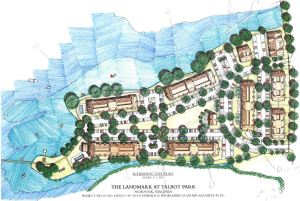 There were still those who were absolutely against apartments.  But the majority of those in attendance at the fall/winter meetings were warming to the newest proposal.  The neighbors asked for one thing:  put the proposal in writing and include it in the zoning of the property.

The neighbors had been let down before by Mr. Collins’ change from condos to apartments.  Before they would sign off on the new plan, they asked that he take the pretty architectural drawings that he was showing off at the meetings, and agree to build what was in those drawings.  If Collins were to put in his zoning that he would build what he was proposing, he couldn’t change his mind later and build something unexpected.  Without the zoning change, Collins could build all of the apartments and not a single amenity.  The neighbors were concerned.

Community members got together and came up with a proposed list of “proffers” or “conditions”.  They included requirements that the pools be built, that the walkway be built, that the elevators be built, and that the buildings look like the pretty pictures that Collins was parading from meeting to meeting.  Most, if not all, of the “proffers” were agreed to by the developer, and there was little doubt that the few that were not agreed to could be resolved.

The problem was that Collins (and/or his attorney) changed his mind and refused to put the “proffers” or “conditions” in the zoning.  They wanted to use them as “site plan conditions” which were unenforceable.  It took a meeting with Planning Director to finally convince the developer that “site plan conditions” do not restrict the developer.  One has to wonder whether the developer knew this all along and was hoping to pull a fast one on the neighbors.  The Planning Director advised that the way to make the “proffers” or “conditions” enforceable was to include them in the zoning.  The City Attorney’s office confirmed this.

Now Collins has backed away from any agreement with the neighborhoods.  He  is going to use the 2008 siteplan and change the elevations (the way the outside of the buildings appear, but not the location or size of the buildings).   He can do this without going before City Council.

It’s a shame that Collins wasted so much of the community’s time with meetings, public and private, and once a deal was seemingly struck, he was unwilling to put it in writing and commit.  One can only hope that Mr. Collins treats the neighborhood and community in a manner in which he would want his neighborhood in Connecticut treated.

The stats helper monkeys at WordPress.com mulled over how this blog did in 2010, and here’s a high level summary of its overall blog health: 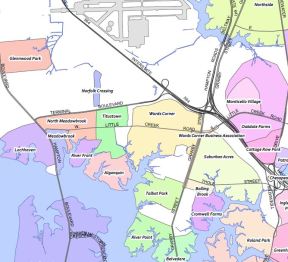 The average container ship can carry about 4,500 containers. This blog was viewed about 22,000 times in 2010. If each view were a shipping container, your blog would have filled about 5 fully loaded ships.

The busiest day of the year was January 7th with 340 views. The most popular post that day was East Little Creek Road – Norfolk’s shooting gallery.

Where did they come from?

These are the posts and pages that got the most views in 2010.