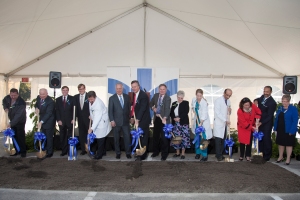 At the core of the medical plaza is a comprehensive cancer institute, which will place state-of- the-art technology in the hands of cancer experts, enabling them to address the unique needs of those battling cancer. Strong charitable support from the community is helping to raise funds to make the Cancer Institute possible. In addition to the Bon Secours Cancer Institute, the medical plaza will also house specialists and primary care physician practices.

“The new medical office building will bring many more patients to our hospital campus with improved access to a state-of-the-art cancer center, as well as physician specialties and services,” said John E. Barrett, CEO, Bon Secours DePaul Medical Center. “This is an exciting phase of our campus development as we bring more great services to DePaul. We are especially appreciative of the generous charitable support from our medical staff, our employees and our community to bring advanced services here.”

“Bon Secours continues to be committed to serving the Norfolk community and to furthering the DePaul ministry that started more than 157 years ago,” said Michael K. Kerner, CEO, Bon Secours Hampton Roads Health System. “We are grateful to the city of Norfolk, as well as to our Bon Secours leaders and our donors, for enabling us to invest in the people, programs and services to better meet the needs of this community.”

Completion of the Bon Secours DePaul Medical Plaza is expected to be in early 2014. Lend Lease DASCO, a national leader in the development, financing, leasing and management of medical office buildings and outpatient facilities, will develop, finance and manage the project. For leasing information about the project, contact Gerald Quattlebaum, 800.452.8121 or e-mail Gerald.quattlebaum@lendlease.com.

Comments Off on Bon Secours Breaks Ground on $22.3 million Medical Office Building on its DePaul Campus |

Guads @ Granby St. is a family restaurant serving Mexican fare.  It has been open for a few weeks now and the reviews from residents and other business owners in Wards Corner are all positive.

Guads @ Granby St. is located at 7515 Granby Street which was formerly Bobbywood, A.J. Gators, and briefly the Wards Corner Pub.

The restaurant has a renovated and rejuvenated look on the inside including new tile flooring around the bar.  There is also a sectioned off area used as a party room for groups of 25-30 and features new flooring as well.

Guads is serving lunch and dinner 7 days a week and looks to be a great addition to Wards Corner.

Suspect in custody after man shot and killed on Harvard St

The Pilot, WVEC, WTKR, and WAVY are all reporting that the man was shot and killed at about 11p.m. on November 26, 2012 in the 400 block of Harvard Street near its intersection with Newport Ave.  This is the area behind Granby High School.

Police took a man into custody after a fatal shooting late Monday.

About 11 p.m., officers responded to the 400 block of Harvard St., after reports of a gunshot victim, police spokesman Chris Amos said. They found a man, who was pronounced dead at the scene.

Police took another man into custody, Amos said. There had been a verbal altercation between the two before the shooting.

Police have not yet released the name of either man.

The following is a Press Release from the City of Norfolk:

In order to comply with the National Environmental Policy Act (NEPA) associated with the transfer of land from the U.S. Navy to VDOT for the road, the U.S. Navy is preparing an Environmental Assessment. The FHWA intends to adopt this EA and complete additional studies in order to better inform a decision document.  Critical components of meeting the requirements of NEPA include soliciting public input and the consideration of such input in the documentation and decision-making process.

Public Information Meeting:
A public information meeting has been scheduled for December 11, 2012 between the hours of 5:00 PM and 8:00 PM in the Sewells Point Elementary School, 7928 Hampton Boulevard, Norfolk, VA.  The purpose of this meeting is to provide the public with information regarding this project’s scope, purpose and need, and preferred alternative. Representatives of VDOT, the Navy, City of Norfolk and FHWA will be available to informally discuss specific issues and answer questions during the open forum portion of the meeting.

Preliminary design concepts and general information regarding the proposed project will be available for viewing and to aid in discussing details of the possible effects on adjacent properties. All interested citizens, groups and businesses are invited to attend the public information meeting.

As always, thanks to Karen Mayne for the following notes from the Greater Wards Corner Task Force Meeting which was held on November 8, 2012 at the Fitness and Wellness Center.

Mr. Privett gave a presentation on the renovations that Bon Secours has undertaken in the past two years and its future plans for its DePaul medical campus. They have invested $14 million inside the hospital on new state-of-the-art medical equipment and facilities. They have implemented a fully electronic medical records program called ConnectCare. In late November they will break ground on a new medical building, which will be located at the eastern end of the current large parking lot. This building will house the outpatient and oncology departments.  Future plans call for an entirely new campus, with the new hospital to be located at the western end of the current parking lot. Eventually, two parking garages will be built. In the interim, parking will continue to be at the western end of the current lot and in a lot where the former
medical building was torn down. Bon Secours will be applying to the City for a Sign Overlay District to allow them to have directional signage as well as a large sign showing the future layout of the campus and large signs on the sides of their current buildings.

Underground Utilities at Wards Corner – Dominion Power has provided a cost estimate of $150,000 for replacing the two wooden anchor poles on the south side of Little Creek Road with larger concrete poles on the north side. A similar design anchor pole may be seen on Norview Avenue at Five Points. The total cost to complete the southeastern quadrant of the Corner is now estimated to be $310,000. The group requested to see a picture of what the large concrete anchor poles would look like before making a decision to make this project a Department of Public Works’ budget request for fiscal year 2014.

Suburban Park Elementary Bus Port – Karen Mayne relayed to the group that the Principal of Suburban Park Elementary, Mrs. Brenda Shepherd, had indicated she had not been contacted by the staff of Public Works and Parks who had worked with the school administration office on the concept design for a new bus port. Ms. Kelly said she would look into that and have someone get in touch with Mrs. Shepherd.

The demolition of the Suburban Park Shopping Center should be completed in the next few months. A citizen request was made to look into the issue of homeless sleeping in the buildings now that all the windows and doors have been removed. Mid Town Shopping Center renovations are almost complete and the parking lot will be upgraded, landscaped and will have new signage. Mrs. Dalis has a number of letters of intent to lease the renovated shopping center. Currently, there are no plans to lease the second story of the central part of the shopping center, but that could happen in the future. Farm Fresh is continuing the process of getting City approval for a drive-through pharmacy.

Crime statistics in the area show a decline over last year. On November 12, the 3rd Patrol will implement 12 hour shifts with two officers per car on a trial basis. This has been implemented in other communities and has worked well elsewhere. The 3rd Patrol will have 10 cars on the street at a time. It will also have five community resource officers and Officer Davis will be taking the new resource officers to civic league meetings to introduce them.

The Senior Services of Southeastern Virginia has an I-Ride program that provides special van transportation for senior citizens and persons with disabilities in the Wards Corner area. The cost is $1.00 each way and the program has scheduled stops at the wellness center and businesses in the area as well as special request stops within two miles of the scheduled route.

The poor quality of the parking lot at the Sai Gai building was again brought up. It was suggested that the owners of the building could be encouraged to apply for an aesthetic grant from the City to improve the lot.

The cell tower at the Masonic Temple that has been disguised as a flag pole now has an American flag that is much smaller than the original flag, which looks out of proportion to the size of the tower. Ntelos is the cell tower owner and the City will look into whether there was any requirement in the City’s permit for the cell tower for a certain size flag.

At the last meeting there was a suggestion for additional benches in the design of the new playground to be built at the Fitness and Wellness Center. Since the current design meets requirements and there is no money for additional benches, it was suggested that the civic league could apply for a neighborhood grant to move excess benches from another playground to the new location.

You may be hearing blasting sounds today at the Suburban Park Shopping Center.  The developer has given the Norfolk Police Department access to the property to do some training.  This is only expected to be a one day training event.

Demolition should begin at the shopping center “any day now”.

The Virginian pilot printed an article and an opinion piece about the Commonwealth’s Attorney’s new Community Collaboration Center recently opened at the Workforce Development Center in Wards Corner.

Placing the office in Wards Corner between the redevelopment under way at the intersection of Granby Street and Little Creek Road and the continued crime problems in Denby Park makes sense. It increases the likelihood of continued change for good. [Commonwealth’s Attorney Greg] Underwood called it “complementing the transition.”

Norfolk Deputy Commonwealth’s Attorney Linda Bryant said that’s exactly what the Community Collaboration Center is designed for. The proximity to neighborhoods in Wards Corner will allow more visitors who are reluctant or unable to travel downtown, she said.