Around 1910 Alfred C. Ward, who operated a grocery store in old Market Square on the southeast corner of Market (then Washington) and Brewer Streets, opened a general store on the northeast corner of Granby Street and what was then Sewell’s Point Road (now Little Creek Road).  It was the only store in the area at the time, although it was said that a building of some kind had been in the vicinity since 1895.

Sometime after the business was started, Ward took on the Michellin tire line.  As a means of promoting the tire line, the Michelin tire representative posted signs on converging roads that read “Meet Mr. Ward at Ward’s Corner.”  Out of curiosity, people flocked to Ward’s Corner.  While some property owners int he area were displeased with the name, it stuck. At that time, and for many years later, it was all farmland, as these pictures show.

In 1926, two brothers, J. Buell and C.H. Tegg, built the first “log cabin restaurant” on the southwest corner of Sewell’s Point Road and Granby Street, specializing in what they believed to be the first “barbecue sandwich” sold in Norfolk.  It was a huge sucess, and in 1934 they added to and increased the size of their buidling.  About 1940 the brothers leased out the restaurant.  In 1950 the business closed and the site leased to Hofheimer’s Shoe Store, who erected the present building on the site.

This picture should bring back pleasant memories to many residents of the local area during the 1929-1950 period.  It is a photograph of the first Tegg’s log cabin taken about 1930.  Renowned in this area for its delicious barbecue, its specialty.  It was located at Ward’s Corner on Granby Street and old Sewell’s Point Road (now Little Creek Road), where Hofheimer’s now stands.  Old Residents of the area state there were only one or two other stores there at the time – A Texaco gas station on the northwest corner (still there) and a drug store of some kind on the northeast corner.  THere were a few homes in the area, and there was still much farmland.  The business was begun by two brothers, J. Buel and Herbert Tegg, in May 1929.  They also operated a standard Oil gas station on the corner as shown in the picture.
.
Ward’s Corner was originally just a nondescript country crossroads in a lush truck gardening area in the 19th and early 20th century.  About 1910 a Mr. A.C. Ward opened a combination gas station and grocery store on the northwest corner of the intersection.  Sometime thereafter, so the story goes, an enterprising tire dealer in Norfolk induced Mr. Ward to handle tires for him, and placed ad signs on the converging roads reading “Mr. Ward wants to see you at Ward’s Corner”.  The name stuck.
.
The Tegg’s could not have picked a better location.  It quickly became a popular place for people traveling east-west and north-south.  Ward’s Corner was on the verge of developing – it would take off in a few more years.
.
Tegg’s business increased rapidly as Ward’s Corner developed and the effects of the Great Depression began to wane.  In 1934 the Teggs tore down the old log cabin and erected a two-story building that had a large banquet room upstairs, enabling them to take care of large parties, meetings, etc., in a more efficient manner.  The new building was ready in 1935.  Prices for the time were most reasonable: a plain barbecue sandwich cost 15c, a combination 20c, a Smithfield Ham combination 25c, a steak dinner 60c, etc., as their menu, printed about 1935 and reproduced here shows.  During World War II it was very popular with servicemen.  For a short time the Teggs later operated a diner at the same time on the corner of Granby and 21st Street where Shoney’s now is.
.
In the late Forties the Teggs decided to retire from the business and went to Florida.  Although they continued to operate the business.  About 1950 the restaurant was finally closed and the building taken down.  The property was leased to Hofheimer’s Shoe Store who opened a store on the corner in 1953. Pictures courtesty Mrs. J. Buell Tegg and are from the collection of CHW.
-Carroll Walker (undated)

Wards Corner – Tegg’s Barbecue – 1930, from the collection of Carroll Walker

Tegg’s Log Cabin Barbecue – The first cabin built by J. Buell Tegg was in 1926. Around 1934 he enlarged the first building to the size shown in this picture operating it with his brother, C.H. Tegg until 1941 when the Teggs retired from the business and leased it to another party, who continued to run the Restaurant. In 1950 the property was leased to Hofheimer’s Shoe Store who tore down the building and erected their own. 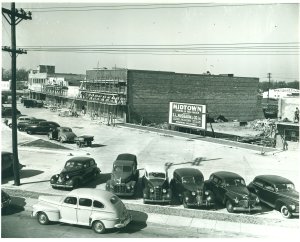 Archivists at the Virginian-Pilot came across this photo folded up in their photo files. It is comprised of three photos that have been taped and glued together. They did their best to digitally correct the fold and glue lines. It’s of course Wards Corner looking south towards downtown Norfolk. The only date on the back is 1950. 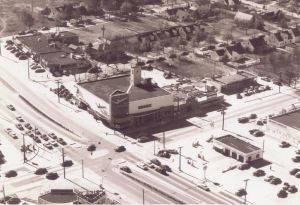 Wards Corner circa 1955 – from the Norfolk Public Library 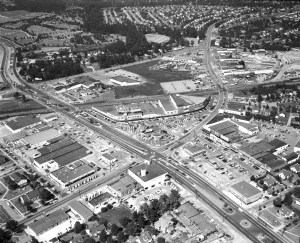 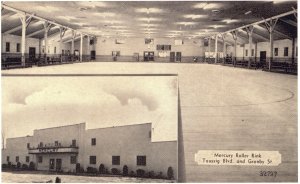 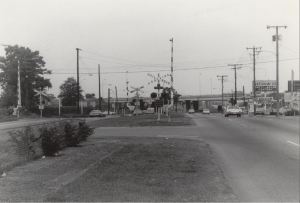 Wards Corner circa 1975 – from the Norfolk Public Library