“The Positive Change for Wards Corner”

Wards Corner Now is  a consortium of Civic Leagues, Businesses , Churches, Schools and the City with the objective and common goal  of improving the Greater Wards Corner area.  For years Wards Corner Now generally held meetings at the Norfolk Fitness and Wellness Center (7300 Newport Ave).  The meetings were held in a round-table style in which participants discuss and exchange views.  Everyone was welcomed and encouraged to participate in these meetings.  Civic League Presidents are often looked to for guidance on issues.

Now, Wards Corner Now does not have regular meetings anymore.  Much of the work that is done to improve the Greater Wards Corner Area is covered at the Wards Corner Taskforce meetings (see below).  Information is posted on wardscornernow.com and everyone is encouraged to comment and discuss. 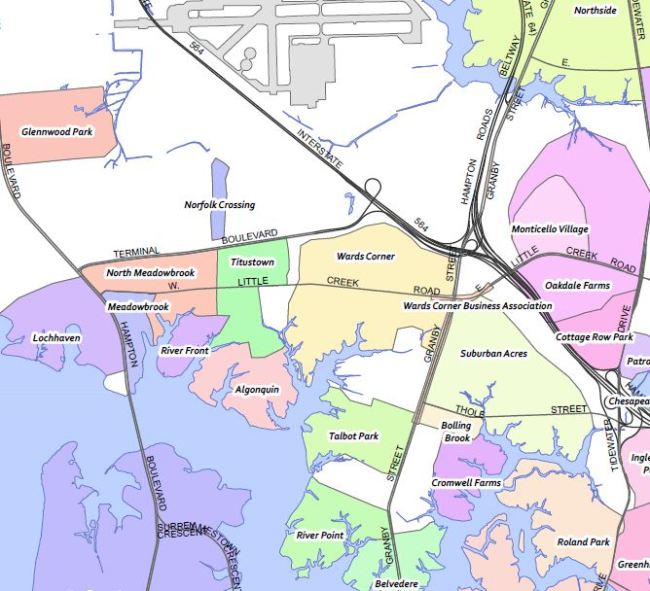 This area is recognized as the Gateway to Norfolk with an important exit (Exit 276) from Interstate 64 leading to downtown Norfolk by way of Granby Street.  Wards Corner Now aims to bring together neighborhoods, places of worship, schools, police, and businesses. Demographics for the 3-mile radius around the Wards Corner business district indicate both a high average income as well as a high educational level.   The Greater Wards Corner Area, however, has a wide range of economic, educational and racial diversity.

The Taskforce generally meets on the 2nd Thursday of each month at 8:30am at the Norfolk Fitness and Wellness Center (7300 Newport Ave).