The following is from a follow-up report by Andy Fox of  WAVY TV 10:

Norfolk, VA – Residents of an apartment complex want better security after one of the residents was killed.

Residents say they heard gun shots Tuesday night. Police found 77-year-old Louis Daniel Jr. dead on Wednesday in his home on Cromwell Parkway. His neighbors hope his death was not in vain.

“I heard the gun shot, and it didn’t sound that close,” said Joanne Knight who lives above the apartment where Daniel died.

He would sit in his window and read in the sunlight. Tuesday night, darkness visited Daniel – a robber in the night with a gun.

“We all are praying. We are on shells walking because we have to watch our backs. We have to do that. We shouldn’t have to that Mr. Andy. We need help,” said Knight.

“They are breaking into cars, breaking down doors when they are not home,” said Knight.

They want trees cut that are around lights, and they want surveillance cameras.

“If you look at the light, how bright will it be behind the trees,” said Laura Davis who is also a neighbor.

Apartment complex management told WAVY.com there is security at the complex, but two residents talked over each other to say security is nearly non-existent. Management has arranged for police to visit on July 28 to give residents tips on staying safe which is more than a month away.

In memory of Daniel, residents will have a candle light vigil, but more importantly they called up because they want better security. Apartment management did not return our phone calls for a response, and told us Wednesday they do have security, but as you have read, residents say it’s not nearly enough security.

The East Little Creek Road Corridor between Wards Corner and Wal-Mart is becoming  a gun range with  humans as targets. Two murders this week in the 800 block of Banaker Road. One murder last week in the 300 block of Fort Worth Avenue and today, Saturday,  another shooting in the 800 block of East Little Creek Road. Click here for story.   Why isn’t Norfolk going to war on this dysfunction that is becoming a part of every day life in our area? Is it because most of the  killings and shootings involve black folks? If this criminal activity were taking place in Downtown, you want to bet that the Mayor and several City Council folks would have their mugs all over the television news. Case in point – The Granby Theater shooting in March of 2007. All hell broke loose in the city’s officialdom.  Click here for story . Why is violence in one part of the city dealt with severely and in other areas almost ignored? One answer is institutional racism. Black folks killing each other in Norfolk  is ok as long as it doesn’t effect the economic development efforts in Downtown.

WVEC  is reporting that two people were found dead at 9:15 a.m. in the 800 block of Banaker Road. This incident is not even one block from Crossroads Elementary School. The report says,

The victims were found inside one of the apartments.
Police didn’t release other information because the investigation is in its early stages.

Comments Off on Two found dead in Norfolk apartment |

A man was shot inside a parked car Sunday afternoon in the Wards Corner Farm Fresh parking lot.  Pilot Online repots that the man had gotten into an altercation with four men inside the supermarket, and the men followed him outside,  and one of them shot him.

Mother and boyfriend charged in death of 4 year-old

PilotOnline reports that a mother, boyfriend have been charged with murder and child neglect in the death of a 4 year old girl.

The suspects are Jathiya Wooden and Troy Allen Edwards who is not the girl’s father. They are are both being held in Norfolk City Jail.

WTKR reports the body of the killer of the Glenwood Park mother, who was holding her 2 month old infant child at the time she was shot, was found washed ashore this morning in Ocean View near the Ocean View Fishing Pier. The body of James R. Brooks was found about 9:45 a.m. by a passerby who called police.

Police have released additional information about a Norfolk woman whose body was found April 27 under a tarp at a construction site and are renewing a public appeal for information.

Lisa Area L’Minggio was last seen in the Wards Corner area of Norfolk on April 19 between midnight and 12:30 a.m. the next day, according to a weekend release from police.

L’Minggio was in a white car with a man, according to police. They did not have any additional description of the car and could only say that the man was black.

This case is being treated by the Chesapeake Police as a homicide.  If you have any information about this case please call Crime Line at 1-888- LOCK-YOU-UP.

Pilot Onlinehas reported that the police are looking for a man that has shot and killed a woman in the 8600 block of Glen Myrtle Avenue in the Glenwood Park neighborhood off of Hampton Boulevard near the Naval Base. It is reported that the man and woman were fighting outside.

WAVY TV has reported that the victim, Monica Zollicoffer, was shot while she was holding her 2 month old infant child. The suspect, James R. Brooks, is 25 years old and should be considered armed and dangerous. Anyone knowing of Mr. James Brooks whereabouts are asked to call the Norfolk Police at 441-5610 or the Norfolk Crime Line at 1-888- LOCK U UP.

Comments Off on Woman shot to death in Glenwood Park neighborhood |

I was really shocked when they showed up at my door to tell me they had some bad news to tell me about my son. It was very very hard

Nancy Cox said Lt. Cox always would remember his family no matter where he was in the world. She received a package from him the day he was murdered.

I have thimbles from all of the places he was. He always sent me a thimble. And I have all of his cards and his letters

Nancy Cox had planned on visiting her son this summer. She hadn’t seen her son in two years.

As a follow up to the Beverely murder I am hearing that a lot of people think this is a gang initiation or a random act. I can tell you it was neither. As is common with most murders, this had some underlying factors that tied the killer to the suspect. The best help citizens can provide would be any information on the two tone Ford F-150 that was used by the killer. If anyone saw anything related to the murder (especially any license info) that night and has not been reported, please urge them to contact PD. They can contact me 613 8593 or 423-4448  Officer Jackson or Hubbard (823-4478).

Below is a PDF file of the wanted poster for the murderer of Navy Lieutenant Todd Cox. Please print and distribute among your neighbors and post in your businesses. 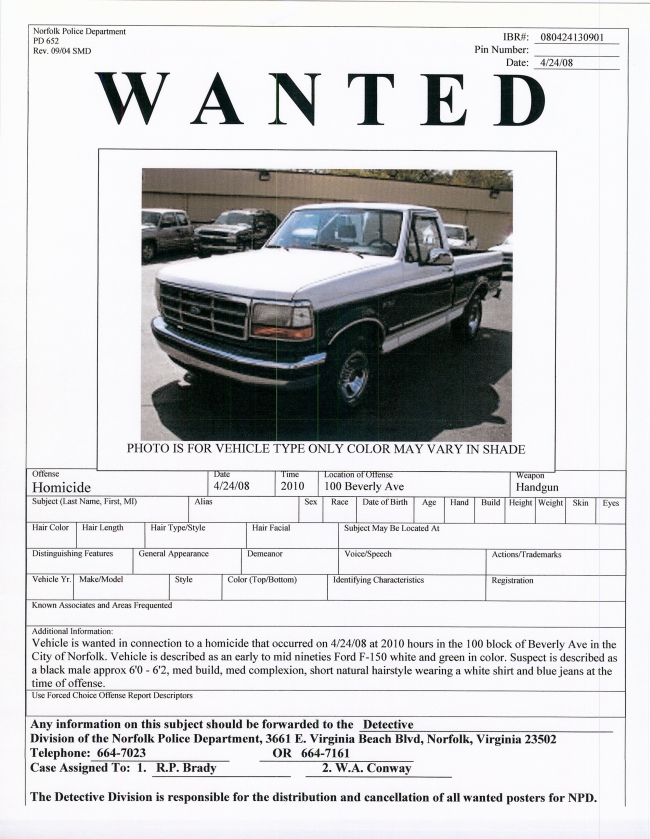 Comments Off on Wanted poster for the Beverly Avenue Murderer of Lt. Todd Cox |

Information surfaces on the suspect of the Beverly Avenue murder

From a source that must remain  anonymous, we have gotten a sketchy description of the suspect and the vehicle he was driving when he murdered Lt. Todd Cox. The suspect is a black male driving what was described as a green Ford F-150. It is doubtful that this murder was gang related as only one individual was involved. Motive has yet to be determined. As new information arrives, it will be posted on www.wardscornernow.com.

Police continue to pursue leads in murder of Naval officer

Pilot Online reports that there still is no arrest in the murder of Navy Lieutenant Todd Cox on Beverly Avenue.  Lt. Cox was shot at point blank range. The murderer continued to fire bullets into Lt. Cox after he fell to the ground. This murder took place as Lt. Cox was walking with his fiance and two children.

A funeral Mass for Lt. Cox will be conducted at 11 a.m. Tuesday at Blessed Sacrament Catholic Church  located at 6400 Newport Ave. in Norfolk.

The family has asked that memorial contributions be made to the United Cerebral Palsy Association, 1660 L St., NW, Suite 700, Washington, DC 20036.

Pilot Online  reports that Norfolk Police have identified the Beverly Street murder victim as 40-year-old Navy Lieutenant Todd M. Cox of the 500 block of Talbot Hall Road.  Lt. Cox was walking with his fiance and two children when he was gunned down. He died with multiple gunshot wounds.  This tragedy has affected two of our Partnership neighborhoods, Ellsworth and Talbot Park.