The Arts Commission on Thursday, November 7, 2014, voted to recommend to the City that it build Gordon Heuther‘s design for public art in Wards Corner.

The art is planned to be located in the median of Granby Street at the location of the current gateway sign near the intersection with Suburban Parkway.

The art is constructed with a stainless steel base and a 1-inch thick acrylic with a historical map of Wards Corner applied to the inside surface.  While the art is shaped like the Wards Corner intersection of Granby St and Little Creek Road, it also can appear like a bird in flight.  It is planned to be 15 feet tall and have a 12 foot “wingspan”.

The art will be ground-lit with color changing LED lights.

In what was a very lengthy collaborative process with the artist, this final piece both excited and pleased the Wards Corner art commission subcommittee.  Look forward to construction to begin in the new year. 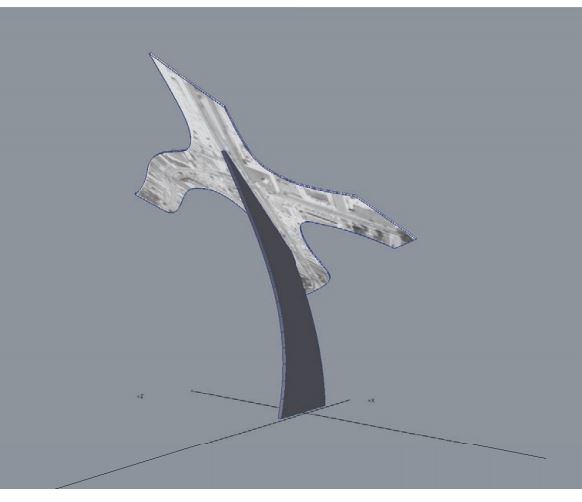 A Request for Proposals (RFP)  is in the early stages of being drafted by the WCPAPC.  The RFP will likely outline the possible locations for public art in the Wards Corner area.  Some of the preliminary areas identified included some of the medians on Granby Street, the HRT bus transfer station, and possibly some space in front of the new Harris Teeter anchored shopping center.  The RFP will also give direction for the site specific artwork but will likely be vague to allow for the artists to make unique proposals.

Once the RFP is finalized it will go out to artists nationally.  It is hoped that the RFP will be completed in time such that the artists responses will be due by the end of October.  The WCPAPC will then reconvene to review the submissions and work towards selecting an artist for the project.

The City of Norfolk currently has $150,000 to use for this public art project in Wards Corner.