Rice’s and Hofheimer’s at Wards Corner

The following is taken from the Virginian-Pilot Archives Facebook page:

It was 62 years ago [2/6/1952] tomorrow that the beloved Hofheimer’s and Rice’s opened at Norfolk’s Wards Corner.

It took over a year to construct the $350,000 building.  Norfolk’s mayor Duckworth made an appearance at the opening ceremony where shoppers received balloons, lamb’s wool shoe buffers, key cases and Hawaiian orchids.

The Hofheimer’s store was the fourth in the shoe chain to be located in Norfolk proper.  Some features that allowed customers to enjoy their shopping experience:
The store has its own 50 car parking lot.  Comfort was assured while shopping as the entire store was cooled by air conditioning. The lighting was florescent and incandescent throughout.  Flagstone floors and carpeting were found throughout both stores.  Elevator service was provided to the second floor.  On the second floor, children were delighted to find a supervised “Circus Playground” complete with a merry-go-round, slide, see-saw and hobby horse.

The most popular feature of the store and the one that seems to bring back the most memories of the establishment is the glass enclosed cage where two South American woolly monkeys were housed (On the Sewells Pt. Rd. side – now Little Creek). The cage was air conditioned at a constant 70-ish degree temperature for the comfort of the animals.

It seems that most locals remember one monkey – Lulu… and we scoured our photo collection for a picture of Lulu but came up short.

The building was demolished in 2000 and a Walgreens now stands at this location. 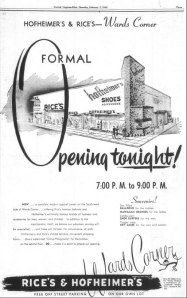 A large advertisement that ran in The Virginian-Pilot the day of the opening.

A rare shot of the location where the building would be constructed – photo taken in 1950. VP file photo. 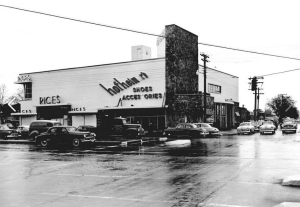 A shot of the store just days before the Grand Opening. Virginian-Pilot photographer Charles Borjes snapped this photo on Feb. 5, 1952 as workers put the final touches on the store. Photo c/o The Sargent Memorial Collection. 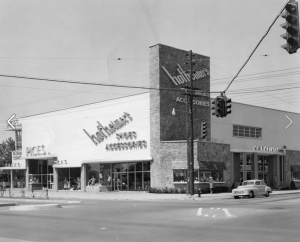 Comments Off on Rice’s and Hofheimer’s at Wards Corner |