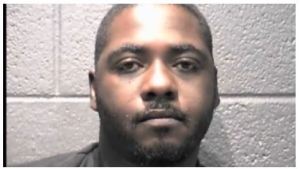 Parker-Chesson says Jones then titled and registered the vehicles to “March-E Fragrances” and likely knew what the vehicles were used for.

According to police, the following burglary/residential incidents occurred with suspect vehicles all registered to “March-E Fragrances.”

Parker-Chesson said on August 24, a vehicle registered to “March-E Fragrances” was stopped for a traffic infraction.  The driver of the vehicle led investigators to additional vehicles.

Authorities said Jones also had some of the vehicles crushed at a Chesapeake salvage yard.

Warrants are issued charging Jones with 22 counts each of obtaining documents from DMV when not entitled thereto, altering or forging certificate of title or registration card, unlawfully transacting or offering to transact business as a corporation without authorization.

Jones is being held at the Norfolk City Jail.

The investigation is ongoing.  Anyone with information is asked to call the Crime Line at 1-888-LOCK-U-UP.

This entry was posted on Wednesday, September 11th, 2013 at 9:57 am and is filed under blight, crime. You can follow any responses to this entry through the RSS 2.0 feed. Both comments and pings are currently closed.